Book Projects and Other Research Activities

Otherwise Human: The Institutes and Institutions of Rights

Synopsis: This book explores idioms and languages that expressed or signified moral choices and ethical commitments associated with human rights from the eighteenth-century to the present. It defines three political trajectories, originating in the French, American, and Haitian revolutions that correspond to the moral requirements of three distinct political subjects –citizen, individual, and person.  These revolutions inspired movements across time and space, from the nineteenth century until decolonization. For pragmatic reasons, the manuscript focuses principally on Haitian representations of the ‘essential’ human faculties and capacities as coeval but a critic of post-Enlightenment liberal and republican notions of human rights. The aim of the book is to bypass the instrumentalization of human rights discourses in favor of an inquiry in the modern genealogies of human rights.

Research base: Graduate seminar and lectures on Human Rights and Humanitarian Law. Sections of the manuscript have been incorporated in anthologies (for instance, ‘Mind, Body, and Gut!: Elements of a Postcolonial Human Rights Discourse’ in Brawen Gruffyd Jones, Decolonizing International Relations, Rowman & Littlefiel, March 2006).  Other sections have been presented at academic fora (‘Terms of Endearment, Rules of Engagement,’ Columbia University, Conference on the Political Uses of Human Rights, November 8-9, 2001). 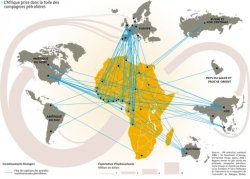 Future Anterior: A Genealogy of International Relations and Society

Synopsis: This book project reconsiders the ideas of the ‘international’ and “international relations” postulated by the discipline of “international relations”. In the first instance, it challenges what amounts to a theoretical fundamentalism in international relations: the twin tendencies of 1) conflating international relations with the processes and modes of  institutionalization of Western power, interests, and identity globally; and 2) substituting generalized and fixed assumptions of the modern state, state interests, sovereignty to complex historical events involving a multiplicity of actors with conflicting desires and interests. In this regard, this project makes a case for a separation of the historically expressed Western wills, desires, and subjectivities from those projected or embraced by other constituent members of international society. Indeed, the organization of the book reflects postcolonial contestations of modern subjectivity, identities, and their political economies. It thus re-examines the ‘past’ of international relations with particular regard to the identities, values, and roles of multiple agents, subjects, and actors worldwide who helped bring about what amounts today to the “international community” and/or “society”. The hope is to bring to the fore these actors, their intellectual resources, and their ideas of the moral order in order to broaden international theory and related policy options. Finally, the project is intended as basis for envisaging a new ethics as well as future political possibilities.

Research base: twice taught four-semester-long graduate seminar entitled ‘Ordering the Universe: Genealogies of International Relations and Society.’  The project has four empirical sections, each corresponding to a semester-long seminar.  They are 1) International Relations ca.1492 (1492-1600s); 2); State, Modernity, and Violence (1700-1850); 3) Nationalism and Alienation (1850-1945); and 4) Re-framing Globalization (1945 to the present).

After decades of neglect, jurists, social scientists, and ethicists have regained interest in the rule of law – particularly the connections between political and legal institutions and freedom and prosperity. This book proposal explores the promise of global responsibility and justice under a set of law-like systems of rules and processes recently introduced in Chad in conjunction with a major oil and pipeline project that has been underway since 2000. Specifically, I am interested in the operationalization of the rule of law by the three architects of the Chad Pipeline Project: the World Bank, a consortium of oil companies led by ExxonMobil, and the state of Chad. The pipeline project is, at $3.7 billion, the largest construction project on the African continent; it also represents the World Bank’s largest investment in sub-Saharan Africa to date. More importantly, the pipeline project is an experiment to determine whether, subjected to certain law-like systems of rules, an extractive industry can serve as the foundation for national development, poverty reduction, and improvements in living conditions in one of the world’s poorest countries. This question is particularly compelling given the poor records of other petroleum-rich countries in terms of achieving social and political stability and widespread access to global public goods such as education and health (Karl and Gary, 2004; Auty, 2003).

The proposed study has three specific aims: 1) to examine the rules, procedures, and mechanisms incorporated in the Environmental Management Plan and the Capacity-Building Plan against general notions of rights and constitutional principles associated with the rule of law; 2) to explore how the World Bank, the oil consortium, and the state understand and incorporate the rules and procedures of the EMP and CBP into their activities; and 3) to record and map the effects of the operations of the EMP and CBP on existing social and legal systems which, in turn, affect citizens’ experience and appreciation of the social good, particularly justice.